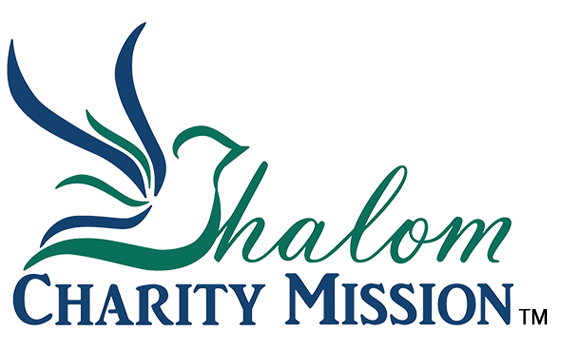 There are around 580 groups of the 10 Crore Tribal people living in India. The third largest group is the Bhil Tribe and they live in borders of the three states Gujarat, Rajasthan, and Madhya Pradesh. There are around 1 Crore Bhil people in India. 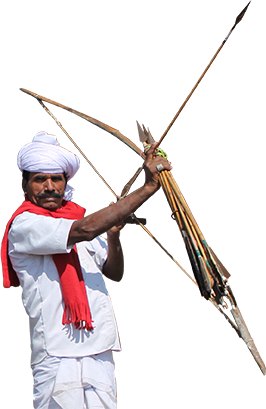 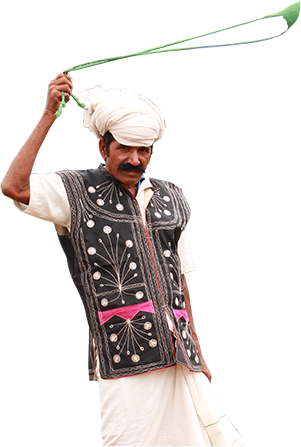 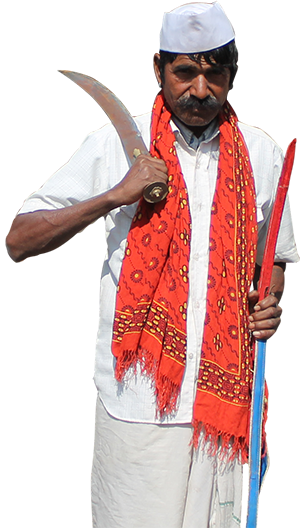 Bhil is a Dravidian word, which means Bow. Every Bhil family have bow, arrows, sling and swords, which are not used for hunting but for looting, fighting and forprotecting themselves. When their harvest is less or if they are in need of money, they take their weapons and go for looting the houses and attacking the vehicles on road. 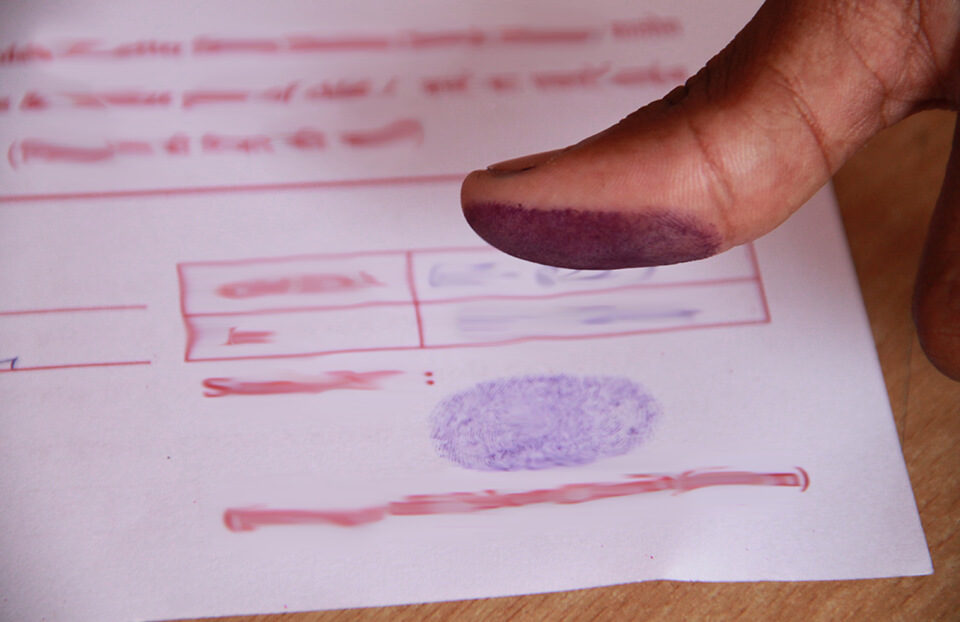 The Bhil people in Gujarat speak Bhilodi, those in Rajasthan speak Vohudi, and those in Madhya Pradesh speak Bhili. These languages do not have any script. Most of them understand Gujarathi, so word of God is preached in that language. They sing songs in their tribal languages, which has been composed by them from the Bible. Through these songs, the Bhil people are able to know God. 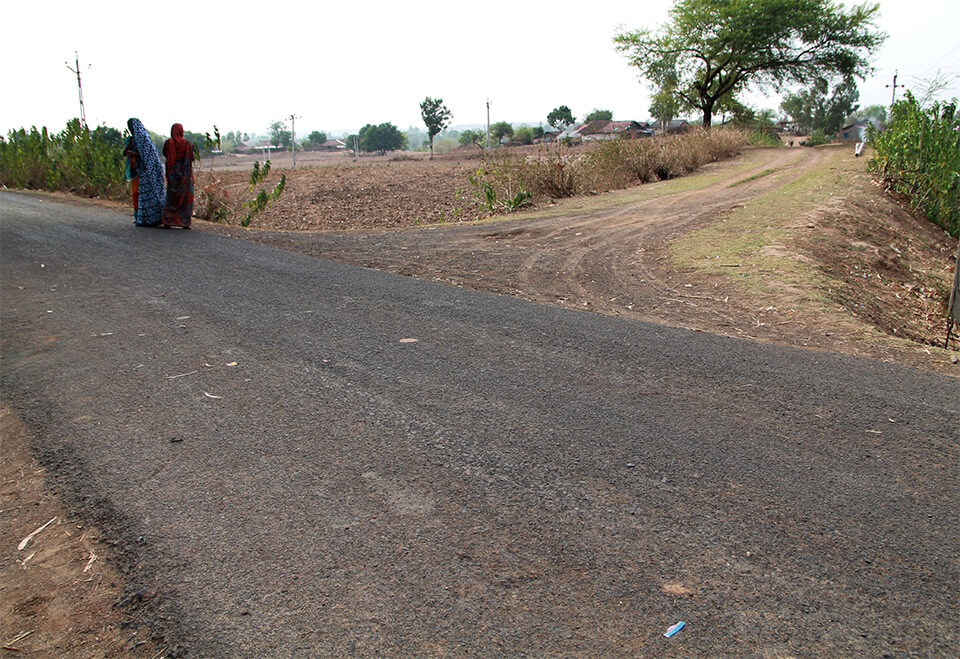 In the interior Bhil village, we can find that the people are not well dressed. Men wear turbans which are five meters long. Usually the Children do not wear anything. The Bhil people are fond of silver jewels and they wear them. During celebrations they come well dressed in their traditional dresses. 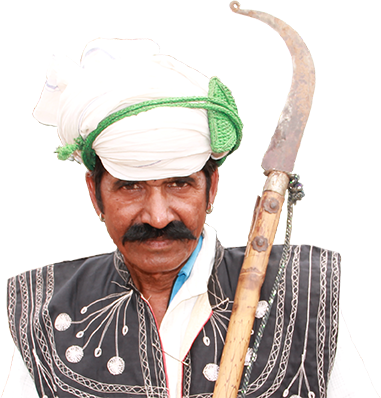 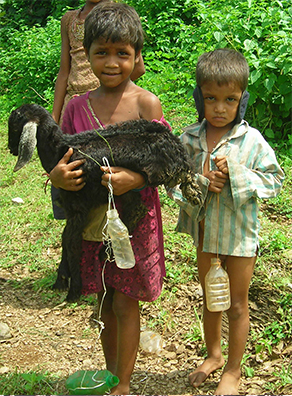 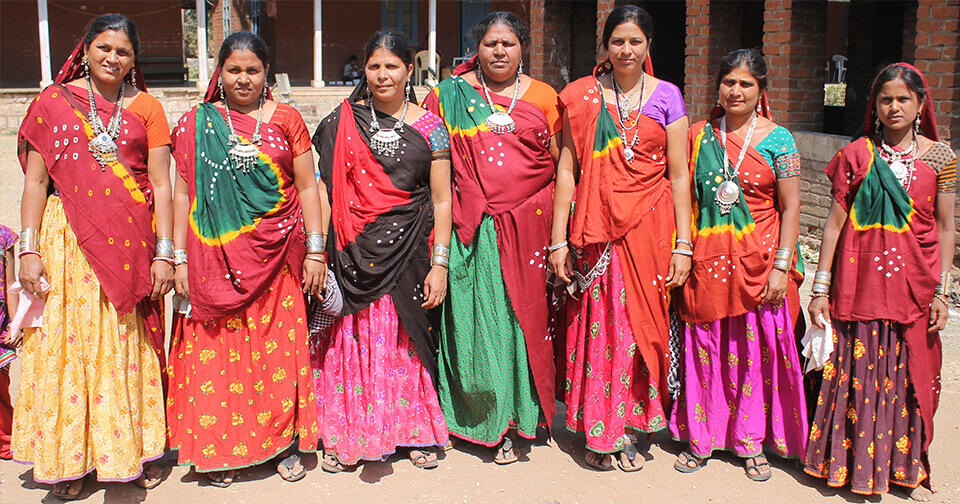 Bhil people live in small villages in hilly regions. They construct small huts and around their huts they sow maize. They make roties made out of Maize flour without oil and they are had along with a side dish made with a lot of chillies, ginger and garlic. Men at the riverside prepare an alcoholic drink out of the flowers called Mova, which grow in their region. Everyone consumes it, including women and children. 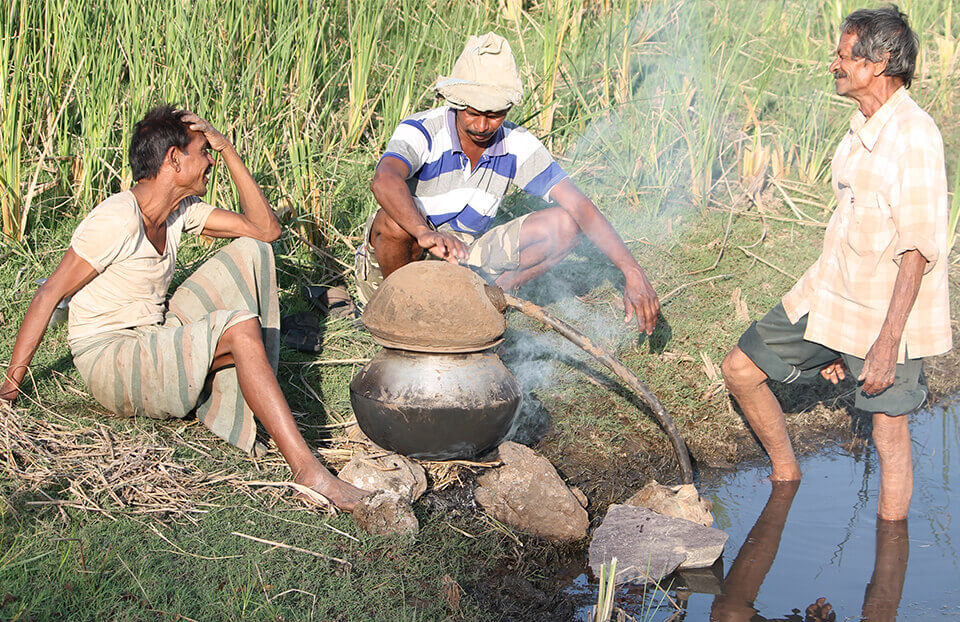 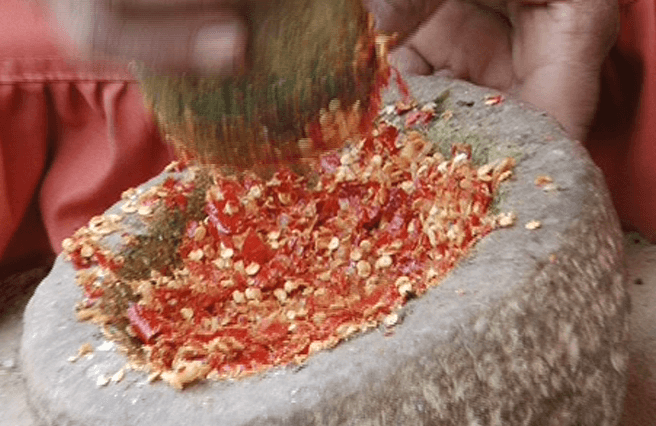 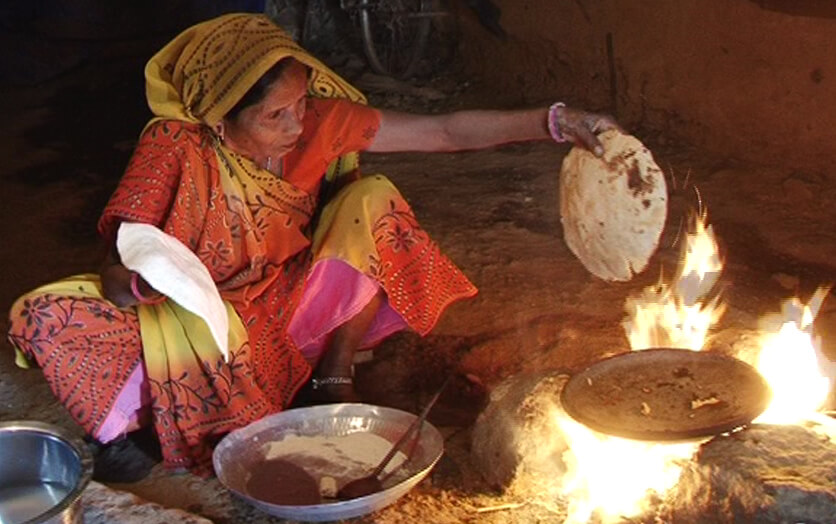 Roti made from Maize flour 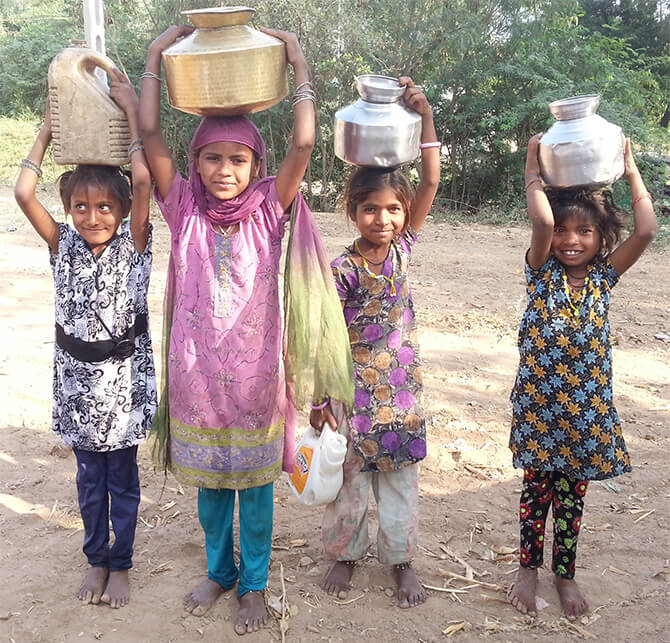 Water from a Dug Pit

This is one of the reasons they often fall sick. In these waters there are worms which causes sickness and soreness in the legs. 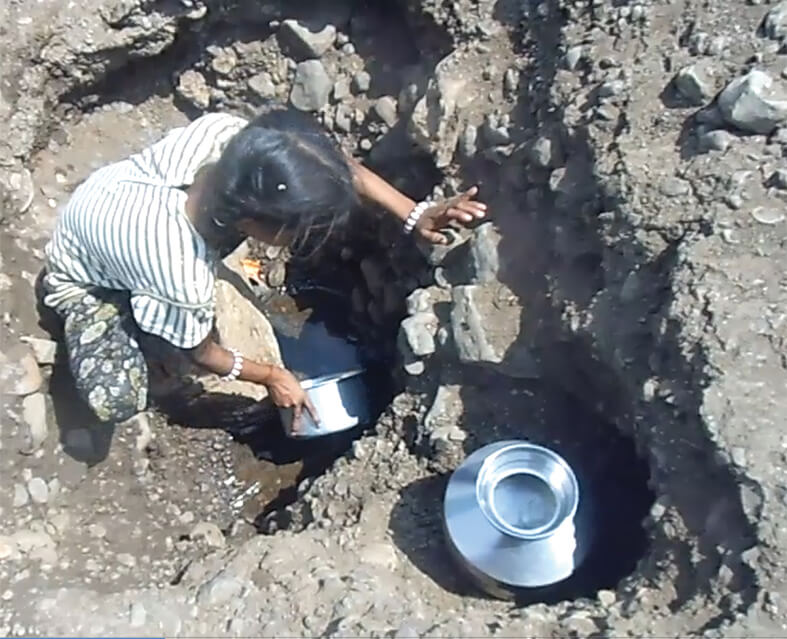 Tribal people worship the spirits of the dead. They consider magicians as gods. They sacrifice goats and hens suggested by the magicians for blessing and healing. Since this is practised, in every house there are evil spirits. They do witchcrafts to destroy other peoples’ lives. Older women teach the younger ones about the witchcraft and how to use them. Therefore all the families are in the clutches of evil spirits and are being destroyed not knowing how to be redeemed. 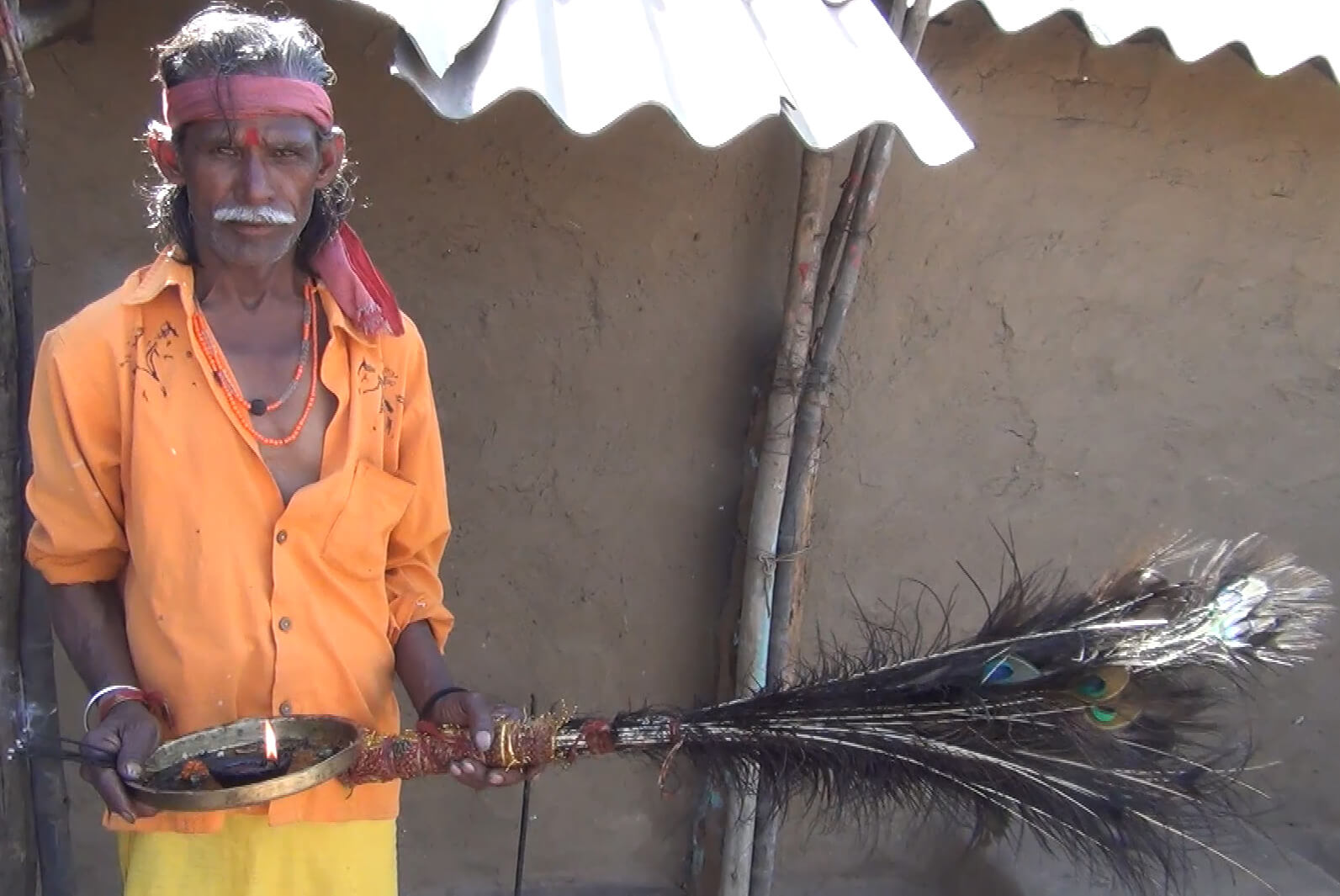 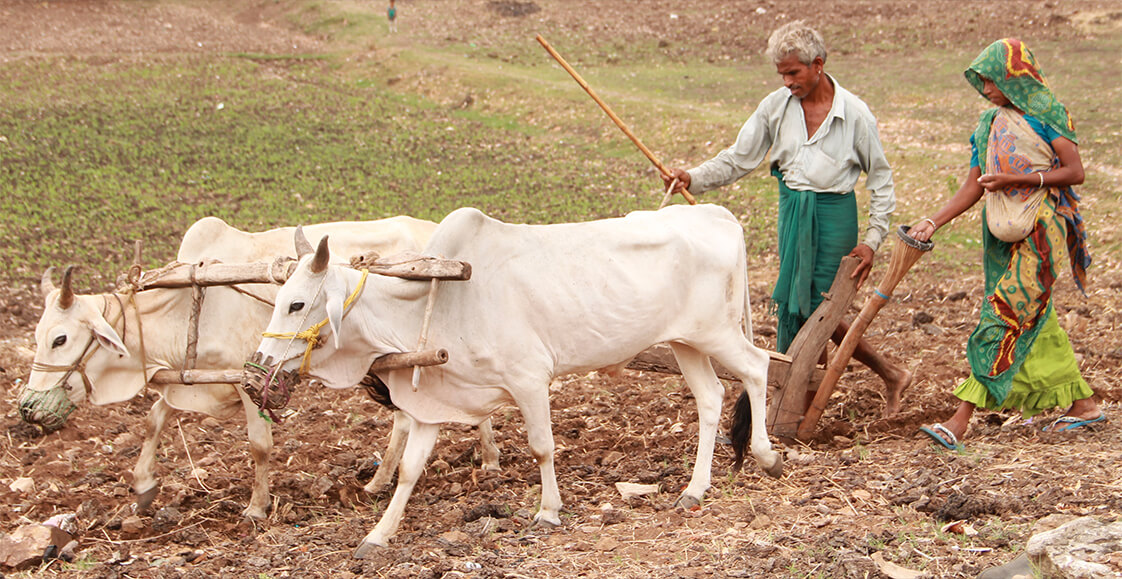 Bhil people rely on rains for their livelihood. Without rains, there is no harvest. They work very hard as labours in towns, and most of the time they will be cheated and will not be waged. If they borrow money for interest, they suffer all the more. Some are forced to lose their fields because of their debts. 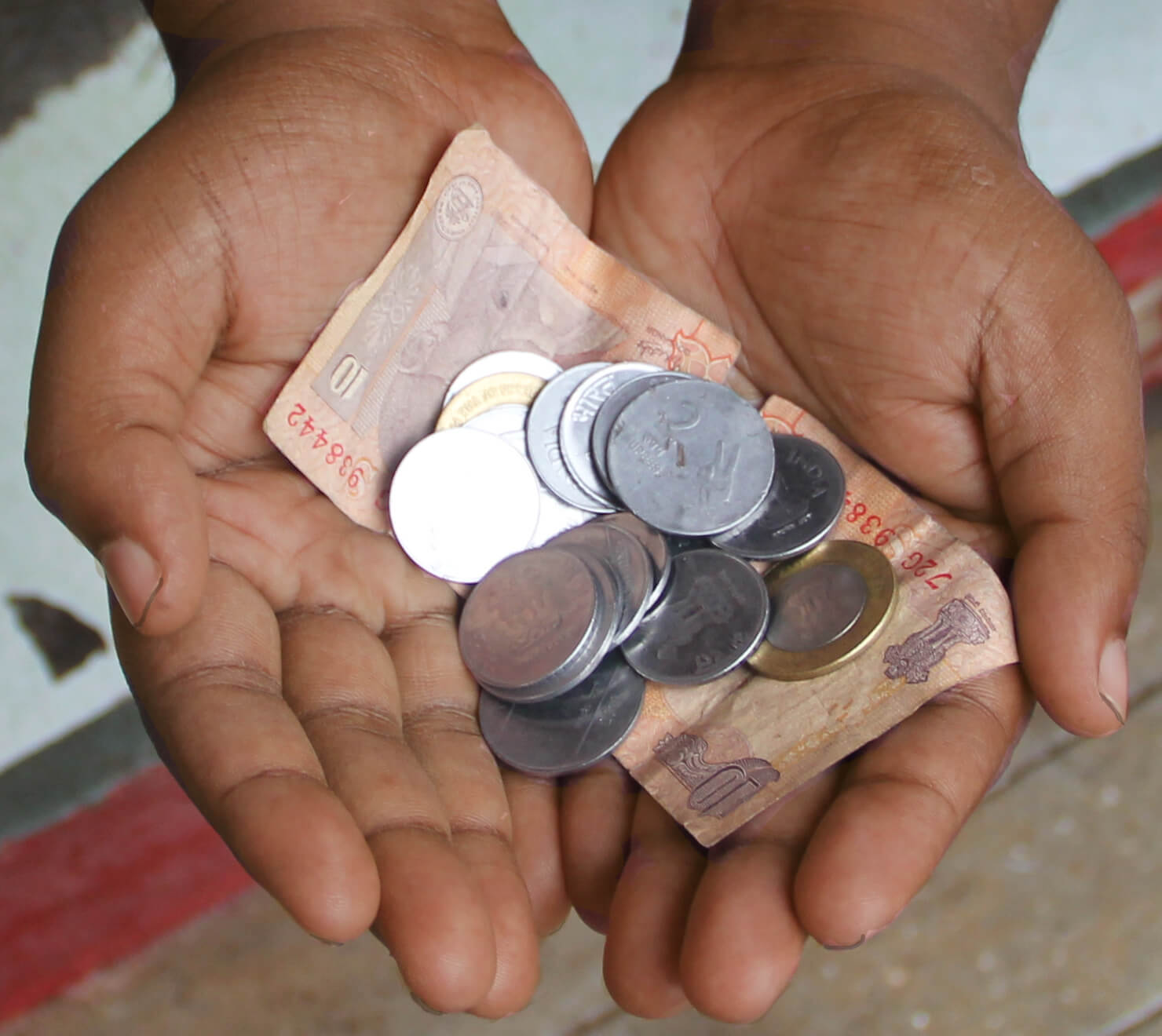 Getting cheated by getting a very less wage 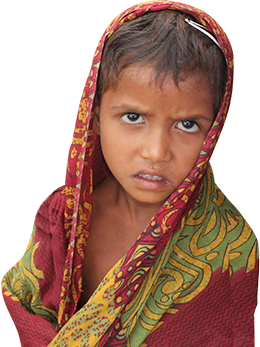 In the Bhil villages, there are no medical facilities. In Taluk headquarters there are hospitals but there are no trained doctors. The doctors work only for money. They do not administer polio drops or vaccines for children. Health and hygienic conditions are very low. People easily get affect by Anemia, Malaria, and Typhoid etc. The hospitals are too far away from their villages and these tribals rarely go to the hospitals because they could not be able to afford. 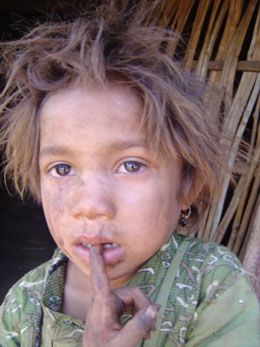 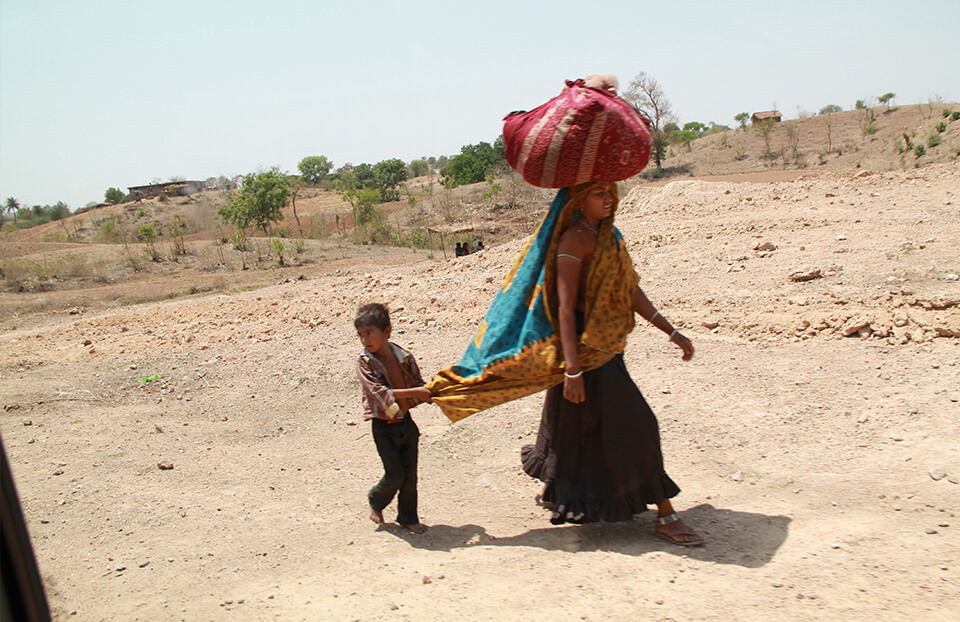 Proper transportation facilities are not available in the Villages, so people walk miles of distance and cling on to any vehicle on their way to get to their destinations. Taking sick to the hospital on time is impossible & the same with school going children. Around 30 people travel in a Jeep and 12 in an auto rickshaws. 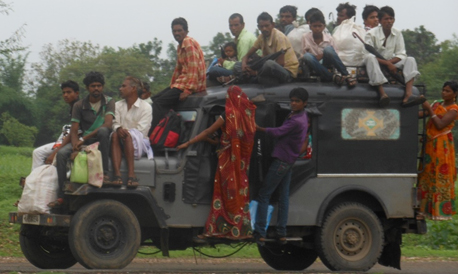 More than 30 passangers in a Jeep 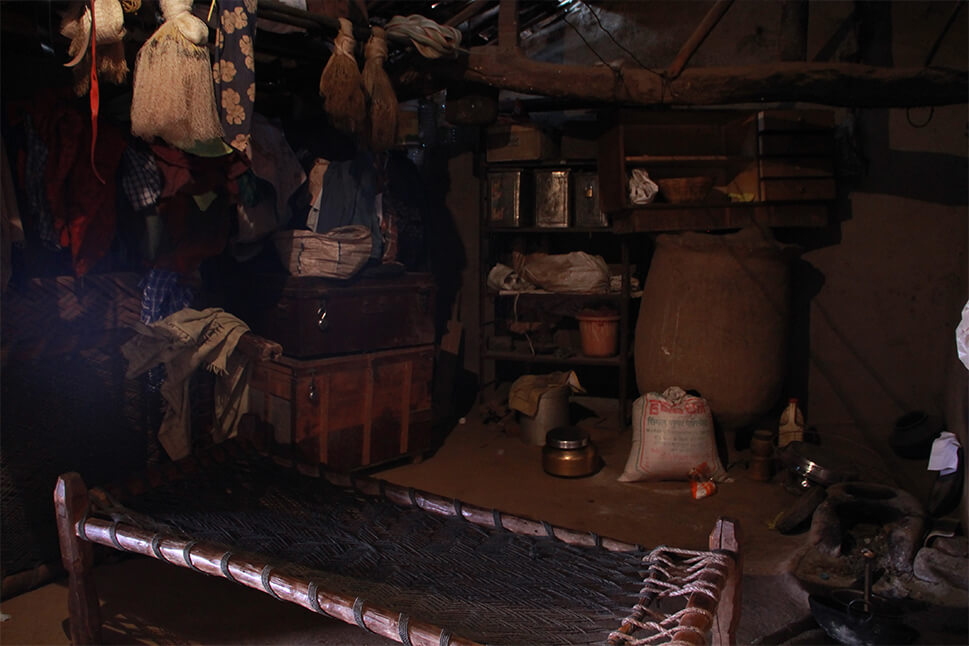 House with no electricity

The Government records says that many villages has been given electricity but it is not true, because some villages do not accept the electricity connection, saying that they cannot afford to pay the bill. In some Villages the power is supplied only for 3 to 5 hours a day. 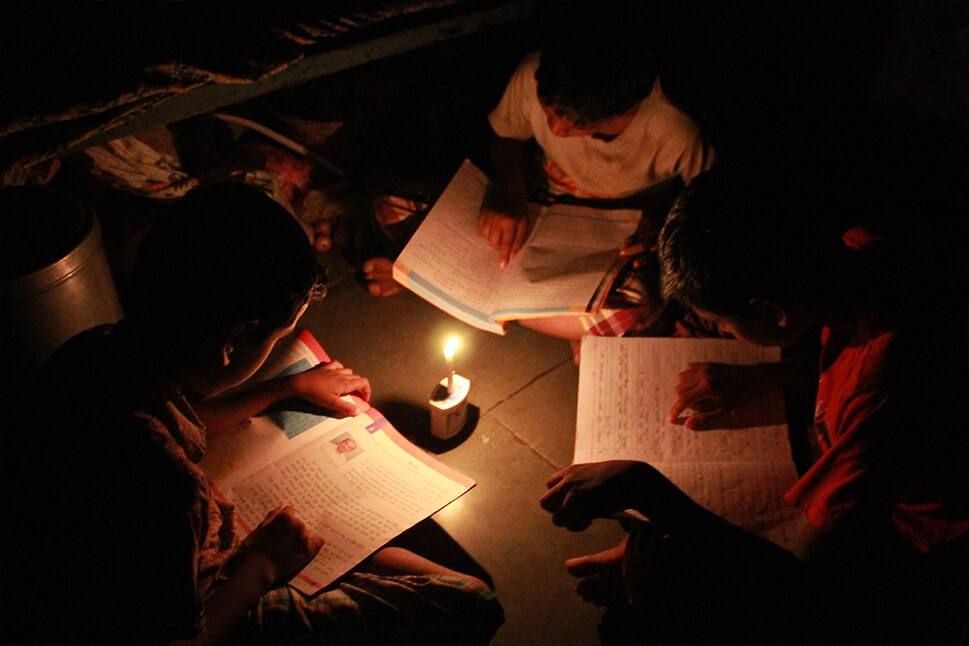 The Bhil people work in the fields leaving their children outside the field carelessly. And at a certain age the children also work along with their parents in the fields and migrate for labour work. The Bhils are 70 percent uneducated and the rest are very poorly educated. There are only a few schools but there are no good teachers. The Bhils do not know how to read, write or count. The Bhil People can not afford the school fees. So the children do not go to school and remain uneducated. This ends in illiteracy, child Labour and early marriages.

If these children are given some support for their studies, they will surely go to school and have a better future and transform their own lives and community. 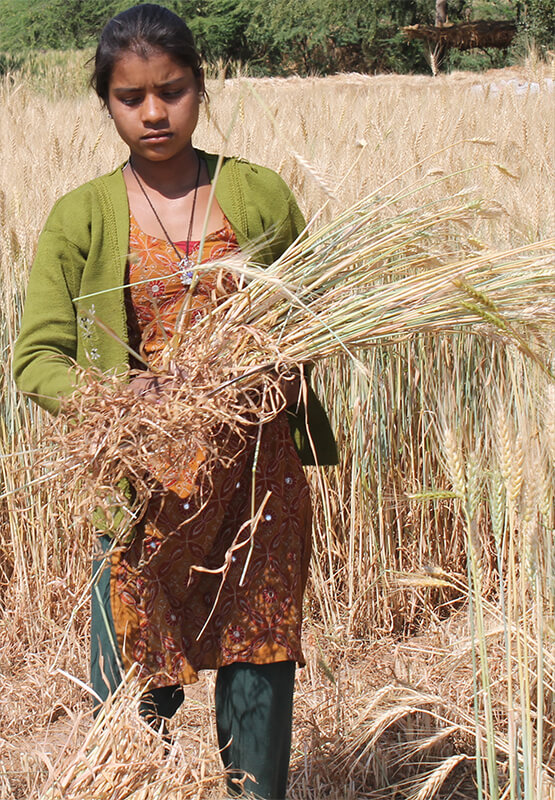 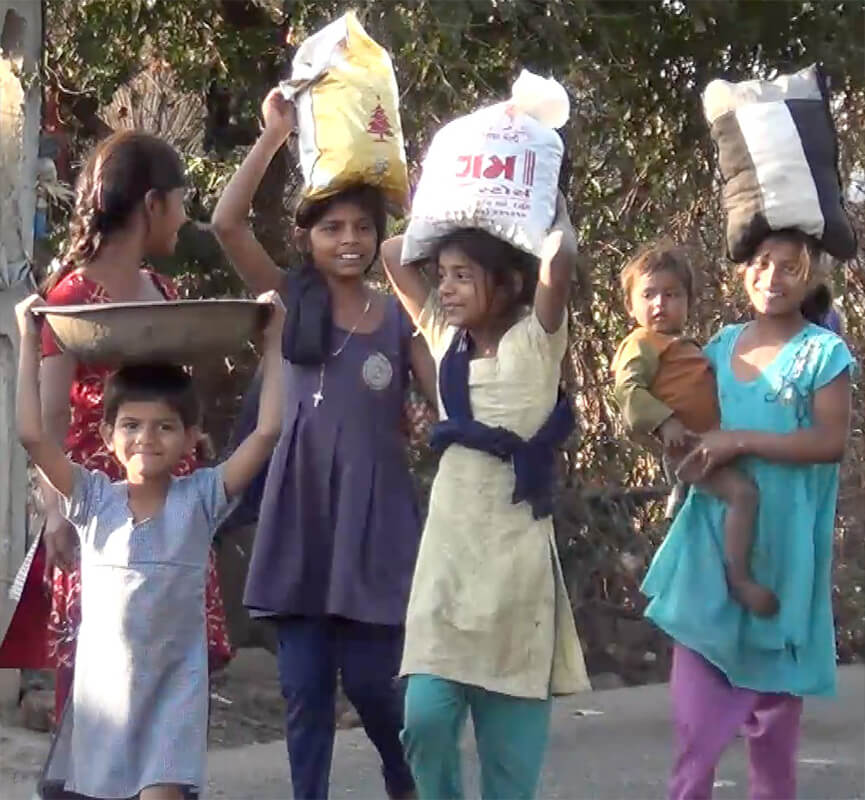 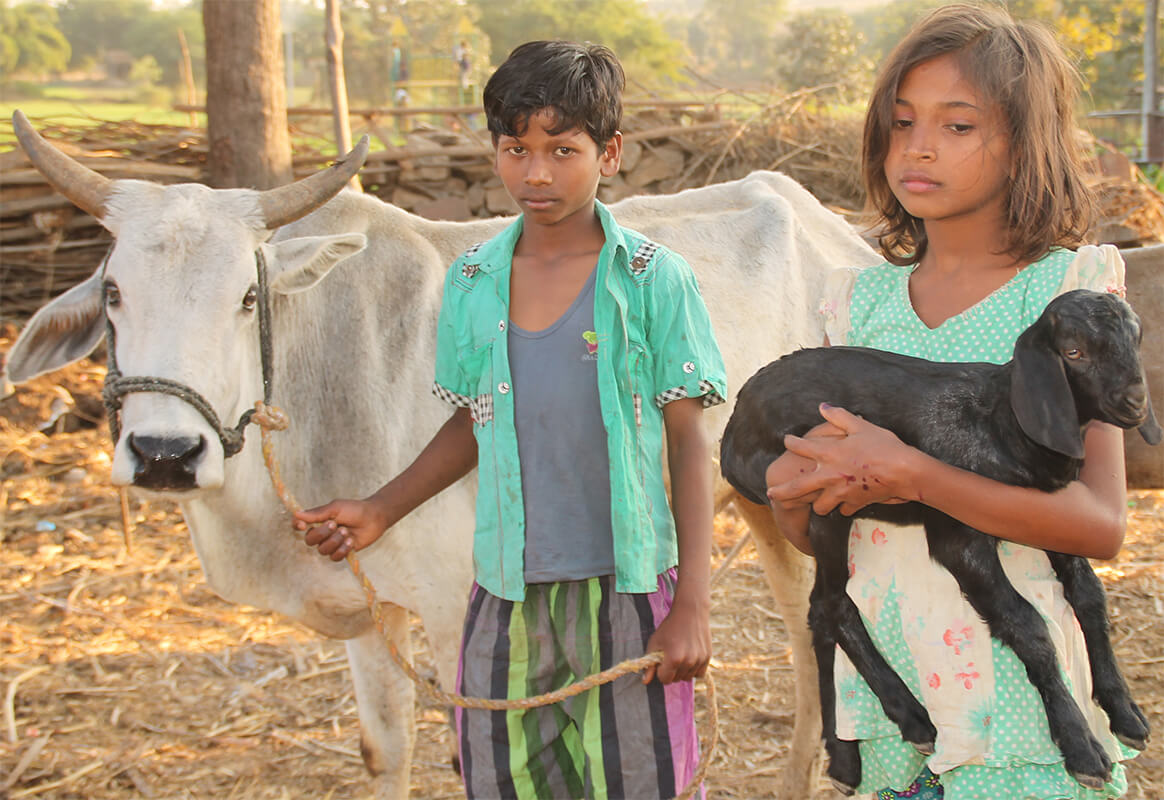